Philanthropists from the Оберіг Надії Foundation help refugees with children 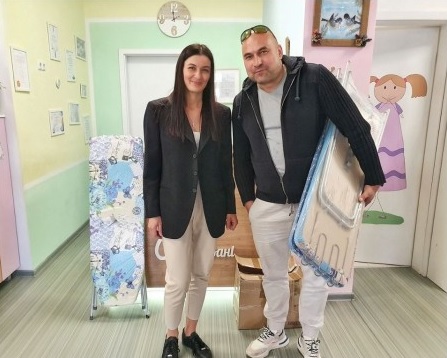 Volunteers and philanthropists continue to meet the needs of refugees currently in Lviv. Thus, the shelter for mothers with children Shelter Lviv, located on Stryjska Street, received detergents, several ironing boards, an iron and personal hygiene items from the charity fund "Оберіг Надії".

These are the items contained in the list that volunteers handed over to Vice President of the Guardian of Hope Oleg Puki a few days ago. It was then that he brought the first consignment of humanitarian aid to Shelter.

"We strive to provide help to those who need it most, and to provide exactly those things that will improve the lives of people who had to leave their homes," says Oleg Pukiy.

By the way, the philanthropists used, among other things, funds donated by a Russian citizen from St. Petersburg who is ashamed of his country. And thus he is trying to atone for the guilt before Ukraine. At one time Victor K. studied at one of the Lviv universities. Now he is going on single pickets in Russia, and has been in jail several times already.

Olga Zabzalyuk, the head of the RIO kindergarten (on the basis of which the shelter was established), thanked for the help and provision of the real needs of migrants from the eastern and southern regions of our country.

Ms. Olga spoke about how Shelter Lviv was created and how many people went through it in the first week of the war.

Now there are about 30 children in the shelter, although in some periods there were more than 50. There are many more adults, says the head of the kindergarten.

Olga Zabzalyuk also noted that volunteers are constantly involved with the children in the shelter:

They liked Lviv, they liked our authenticity, and many of them try to speak Ukrainian.

The girl Christina was evacuated from Kharkiv together with her mother, older sister and brother. My father remained to defend his native land.

The war continues, and Shelter Lviv, like the entire western part of Ukraine, continues to provide shelter to people from the regions where the fighting is taking place. Therefore, the shelter still needs certain things: according to Olga Zabzalyuk, it is food, fruit for children and dairy products.